Keep in mind that I'm still very new.  My poor playing quality is not a reflection on my teacher!

If you look around on YouTube, you will find a lot of people who play essentially the same instrument, but without the benefit of a teacher.  They saw those strings like they are sawing wood and they noodle 3 notes over and over.  And over.
And over.
And at first it sounds kind of cool!  Because that's a different instrument and a sound folks don't already know well.  But before long it gets really grating.  And then it turns into just a bunch of awful noise.
That's the result of self teaching when folks have no clue about the musical potential on this instrument.  I know of no other instrument in the world that people will unbox and proudly upload a video of their first efforts, as if they are making music and want to share with the world.
The other thing is that a disturbing number of people who do this are also playing instruments with extra-long scales and very low tuning.  They struggle to play notes in tune because the scale is so far outside the reach of a normal human hand.  But they are having fun, showing their stern faces, and imagining themselves as Vikings with instruments that don't have any evidence in a Viking context, so at least they are happy.
Find the really good players and you suddenly realize just how different they are from the "look at me with my new thing" crowd.  (And the good players don't have a bunch of runes and norse pagan symbols added to their instruments.  Just sayin.')
I intend to build a few more in the coming months.  I'll try to document a build and share it here.  In particular, I want to make one based on my interpretation of the bowed lyre in the carving at the cathedral in Trondheim.  It is dated to the early 14th century.  It isn't the oldest depiction of a bowed lyre, but is the oldest I've found that uses the small handhole, rather than a symmetrical yoke.

Posted by Man of Many Talents at 11:27 AM No comments:

I've actually wanted to play the jouhikko for a decade or so, but only recently actually got started learning.  I found a player on YouTube who is skilled, musical, and has a long history of playing the instrument and I contacted him to ask about lessons.  And he agreed to take me on as a student!  I've had 6 lessons so far and it is well worth getting the formal teaching.  We have to communicate over Skype and since he lives in Norway, our time zones are 10 hours different.  Which means I have a lesson at 10:30 pm and he's teaching me at 8:30 am the next day.

Jouhikko is pronounced approximately as "YO-hee-ko."  The emphasis is strongly on the first syllable, not on the second, as most English speakers would be more comfortable with.

This instrument is a bowed lyre.  It has a gently arched bridge, so two strings are played at a time.  The center string is normally played as a drone.  Notes are played with the back of the fingers gently touching the horsehair strings.  The bow is tensioned with the fingers of the bowing hand. 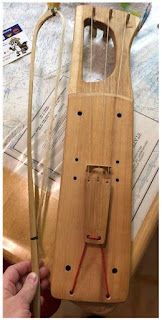 I made the body out of yellow birch, the soundboard out of cedar.  Overall length is about 25", the vibrating string length is 13.5" and the width is 5.5" because that is how wide the cedar was.  The bow is just some poplar I had in the shop.  The strings are twisted horsehair.  Next iteration will have sound holes a different shape from just round drilled holes, but I was playing with a lot of stuff on this one.  The size, the hand hole, the bridge design, the bow, and the tailpiece are all new efforts for me.  In the future, I will keep the size the same, but perhaps make the body a little nicer looking.  And I want to try a sound post under the bridge.  If I manage to get some wider soundboard material, I will try for a 6.5" wide instrument to get a bit more resonance out of the soundboard.
I make no claims about being any good with it, but I love playing it and I hope to eventually be able to consider the sounds I make musical.  I'll add a couple of videos of my (very beginner) playing once they are uploaded.  My connection is slow, so this can take a while.
Posted by Man of Many Talents at 12:57 AM No comments:

Here we go!  If you don't see the video window, click this link: https://youtu.be/cPExoNYlvi4

Posted by Man of Many Talents at 8:56 PM No comments:

If you look over my blog, you'll see that I carve spoons.  My primary tools are a hook knife and a sloyd knife.  Sloyd is a Swedish word for wood crafting.  Essentially, by saying "sloyd knife," I'm saying "wood working knife."  But it is fun to use a foreign word.

I found out that a teacher and student teacher at my daughter's school are both spoon carvers, too.  Because I want to be extra supportive of teachers right now, I thought it would be good to give them each a new sloyd knife.  (I don't want to get into the whole concern about knives in schools.  There are no students in that school right now, so it isn't a big thing to leave a knife in a wrapped package.)

I made the handles of Alaska birch.  Blades are my usual repurposed spring steel.  It is a good steel and I've been very happy with how it performs in my blades so far.

Here's a picture of the two knives just before I did the sharpening and stropping. 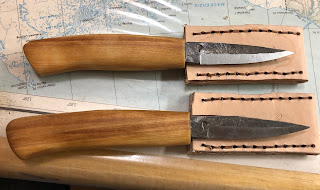 As usual, my mark is the rune Wyn/Wunjo (depending on if you use the Anglo Saxon or the Norse name for it).  It looks like an angular P and it makes the sound of a W, so both my initials are there in one mark.  Sort of fun!

Video of the process is also on the way.  As with the blacksmith mini-seaxes, I chose to just make it a music video and play random tunes on my banjo.  If I ever get any feedback from my videos, I'll get some idea of what people like in my YouTube channel.

Look for the video link tomorrow.

Posted by Man of Many Talents at 9:06 PM No comments:

I know I haven't posted anything in months, but here's something, at least!

I made these two little blacksmith knives because I found a sketch in one of my old sketchbooks and realized that would be a fun little knife to bang out.  Nothing profound, just a case of "why didn't I make this before?"

They are deliberately rustic and rough. But they are still comfortable and would fit the role of the non-folding pocket knife.  I actually plan to make neck sheaths for them and have them hung like a necklace. 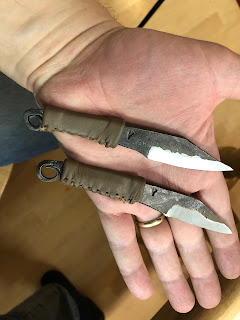 I also took a video of the whole process of forging them.  Here are the highlights.  I am trying something new, here.  Instead of narrating my process, I decided to just play the banjo in the background.

Enjoy!
Edit: this video isn't showing up when I look at the blog on my phone, so if you don't see the video window, just click this link: https://youtu.be/b05JYJynG84

Posted by Man of Many Talents at 10:30 AM No comments:

One of my favorite items from Viking graves is a whetstone necklace.  At least some of them were made of slate.  Many don't appear to have the stone type identified, at least in resources I've found so far.  However, many are similar in shape.  The 3-4" long tapered shape seems to be a normal shape for these utilitarian items.  I never have had a really good explanation as to why anyone would go to the effort to shape them just so, but I assumed there was some practical reason I didn't know.
A really good selection of photos can be found on Pinterest at https://www.pinterest.com/cathyr19355/viking-whetstones/ if you want to see the variations in size and shape.  The next four photos are taken from there.  Note that where stone is identified, it is more often slate than anything else.  And there are some examples of beautiful banded slate here. 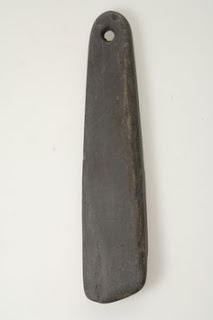 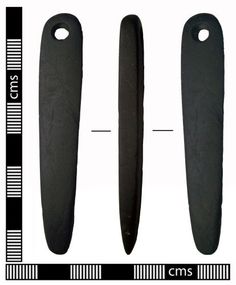 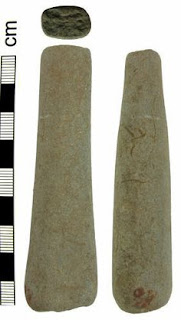 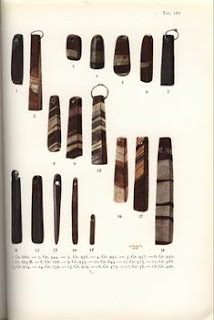 Still, I have wanted one for years and years. So, when I saw reproduction Viking whetstones available from Ragnar's Ragweed Forge, I was delighted.  I now own a jasper whetstone necklace and love it.  You can see it in the photo below.  It is the red one with a leather thong on it.  The surface is quite smooth, so better for final edge polishing than for working out nicks and establishing an edge on a blade.
Some time later, my wife noticed something interesting when we were at a local river.  There were a lot of pieces of slate there, many of which made good skipping rocks.  However, there were also quite a few with a familiar shape to them!

Is it possible that many or most of the historical Viking whetstones were just found in the shape of a whetstone and used in that shape?  Yeah, I think it is possible.
The slate stones are noticeably coarser than the jasper.  These river rocks would work fine for establishing the edge of a blade.
I love finding answers, even if only speculative answers, to questions like "why this shape?"  Answer: maybe because that is a common shape to find the stones already in.
Posted by Man of Many Talents at 12:14 PM No comments:

My youngest child decided that she wanted a solid body kantele like Dad's.  Project time!
First step is selecting the wood.  Here's a fairly hard piece of poplar with a pattern drawn on it.  I don't think it is the ideal wood for this sort of instrument, but it works fine and I had it in my shop already.  The pattern is actually drawn on what will be the underside of the wood.  No particular reason, I just managed to draw it reversed from what it will be.  At this stage, it really doesn't matter to the process. 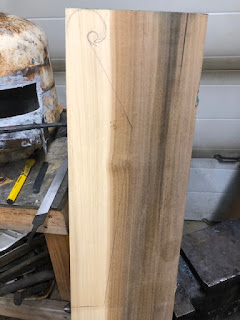 A brief session with the jigsaw and I have the body cut from the board. 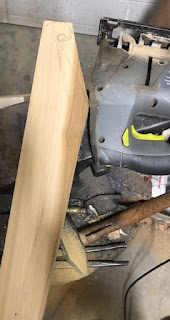 I love my belt sander.  I use it for so many things.  Here, it was vital for refining the edges of the kantele.  I really like the graceful bird head shape at the top.  It is whimsical and elegant.  I think the look of the kantele was the first thing that attracted me.  The sound was next.  I know my young customer was very intent on having that shape at the top. 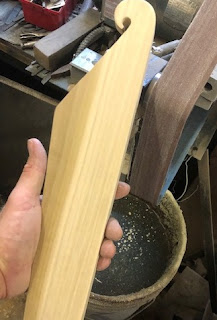 A little scrap turned into a simple bridge.  Five holes for zither pins.  A spritz of spray lacquer.

She wanted wood burned decorations.  She was kind enough to pronounce them perfect, though I can see the skill level of my pyrography just isn't up to what I would consider Third Grader artwork. 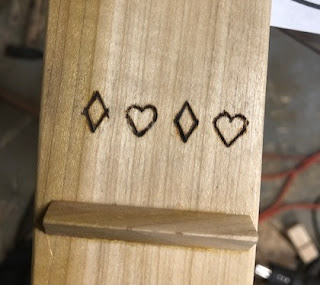 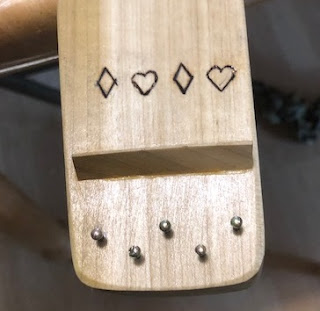 I start the zither pins with a hammer, tapping them in until they stay put, then I can screw them in with the tuning wrench. 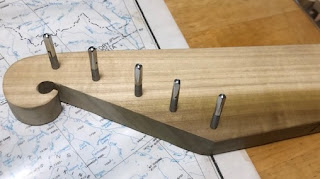 And there we have it!  A finished practice kantele for an 8 year old.  This one is tuned in G.  Super simple, fun little project.  Now I just have to get her interested in learning to play it!

Posted by Man of Many Talents at 11:22 AM No comments:

Man of Many Talents